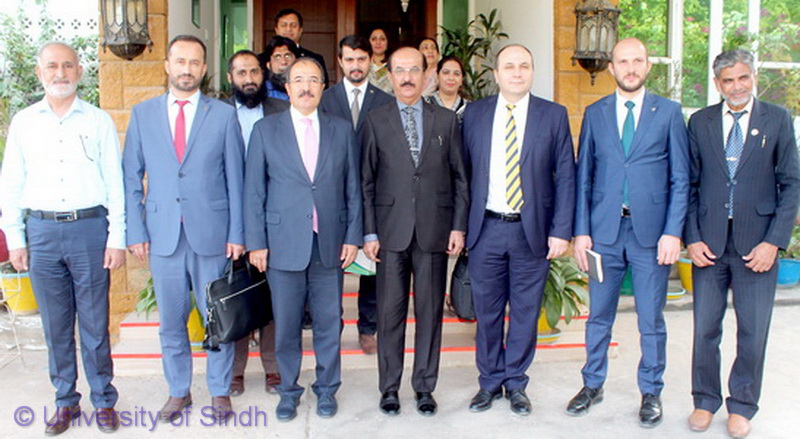 As part of its vibrant international linkage program, SU earned the privilege of receiving yet another world luminary at its Jamshoro campus; as former adviser to Turkish Prime Minister, former member of Turkish parliament and present Member Board of Trustees, Turkish Maarif Foundation Dr. Chahit Bagaci arrived at SU on Tuesday.

Dr. Bagaci called on VC-SU Prof. Dr. Fateh Muhammad Burfat over lunch at his official residence at the varsity.

In a post-lunch formal interface, the two dignitaries exchanged views on matters of mutual interest.

Dr. Burfat shared with the visiting distinguished guest the cordial relations SU enjoyed with its leading sister varsities in Turkey.

He informed Dr. Bagaci about his frequent visits to Yildiz University and Seljuk University in Turkey, the signing of Memoranda of Understanding there-in, and the unprecedented love, affection and honor he had been extended by academics and people of Turkey; while he was there.

Thanking VC-SU Dr. Burfat for warm welcome and gracious hospitality, Dr. Bagaci said education had been Turkish Government’s top priority in and outside Turkey. He assured Dr. Burfat of fullest possible cooperation and support in the solicited context.

Dr. Bagagi said that establishment of Pak-Turk schools in various cities of Pakistan was a part of Turkish Government’s policy priority to promote education and elevate standards of schooling. He said he had been frequently visiting Pakistan in the given perspective.