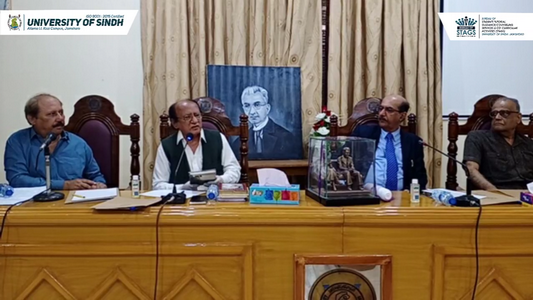 U marks 134th birth annivesary of its founder — legendary scholar Allama I. I. Kazi

Bureau of Students Tutorial Guidance / Counseling Services and Co-curricular Activities (STAGS) led by its able Director Dr. Sumera Umrani, supported by the bureau’s devoted team; has been on the fore-front in celebrating the birth anniversary of the founder and great benefactor of University of Sindh, Jamshoro for the last three consecutive years in form of seminsrs, workshops, symposia, plantation drives, essay competions and debate-contests. Allama I. I. Kazi, apart from being the first learned Vice Chancellor of the varsity at its Jamshoro premises has also been an iconic scholar, widely acclaimed throughout the width and breadth of the subcontinent.

The above remarks were advanced by VC-SU Prof. Dr. Fateh Muhammad Burfat in his presidential address at the webinar organized by the varsity’s Bureau of STAGS to celebrate 134th birth anniversary of Allama I. I. Kazi, which was viewed and applauded by as many as 8,000 lovers of knowledge and wisdom across world.

Vice-Chancellor Dr. Burfat, paying glowing tribute to great Allama Kazi, added that people in Sindh were hard to see as great a well-wisher as Allama sahib. For, he possessed as matchless a vision as to establish in Sindh a premier higher education institution that was, in the long due course, to give birth to almost all other universities in rural Sindh.

” In fact, Allama sahib was an impressive amalgamation of knowledge tributaries and philosophical heritage of both the East and the West. His strong oriental foundations based in Islamic teaching, accrued through Quranic studies and his erudite thought-expansion obtained through perusal of the Western philosophical and theological treasure-trove; further coupled with his dominant proclivity to scientific inquiry and analysis and his vis-a-vis interaction with occidental men of letters turned him into an enviable figure of academic and research authority; not only to be reckoned with as such, — but also best-suited to head the first-ever University of Pakistan after partition” , the VC said.

Dr. Burfat said that they would hardly be able to square up the debt they owed to Allama Sahib on account of, what he termed as “his abiding benignity to Sindh and its masses”.

Noted pen-man and panelist Kazi Khadim said that Allama I. I. Kazi was a man of diversified vision who intended, as he did, to lay the foundation in Sindh; of an institution that equated any other world-class varsity for all practical purposes.

Umrani opined that Allama Kazi was a great educationist and philosopher of the mid-twentieth century in Sindh — ” A torch-bearer of Islamic values and modern knowledge”.

” All his life, Allama Sahib practiced lofty ideals, pursued worthy objectives, and contributed enormously to the national development in the spheres of education and theosophy”, Gul Muhammad added.