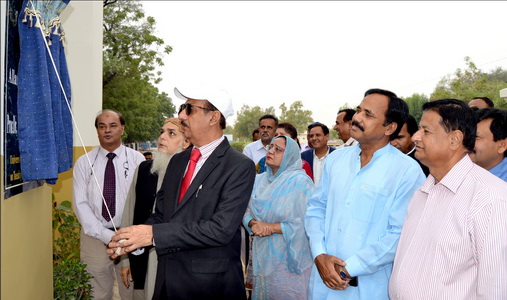 Vice Chancellor, University of Sindh, Jamshoro as part of his innovative reform initiatives, inaugurated the newly-constructed entrance gate at the main in-coming point of the varsity. This gate is a rare marvel of architecture as it bears eye-catching facade, captivating design pattern and majestic look.

In his concise press brief on this occasion, Vice Chancellor Dr. Burfat informed that the given monument had been named after SU founder vice chancellor–legendary scholar Allama I.I. Kazi.

“Such imposing structures become identity of the institutions these represent. Same way, this towering establishment will too become landmark of the varsity,” the vice chancellor said.

Dr. Burfat further said that construction of the given site was in fact another handsome addition to the reforms already implemented at the campus that included development of E-Portal, online attendance, admission and result-systems, rich plantation and infrastructural overhauling.