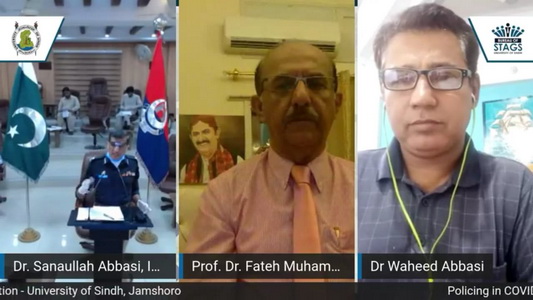 Speakers have stressed mass observance of SOPs as they recommended the same as an effective strategy to nab Covid-19. They also immensely praised Pakistan police for their exemplary performance in the line of duty during the last four stressful and distressful months to the extent of laying down their lives to protect people from the devastating effects of the disease and from the prospects of eruption of other crimes.

Sindh University Vice Chancellor Prof. Dr. Fateh Muhammad Burfat in his presidential remarks observed that police in Pakistan, like everywhere else in the world had to perform multiple roles at a time for the benefit of communities and societies. This multiplicity of tasks, he added, included preparing for impending threats, preventing attacks, responding to assaults, and recovering from tragedies after they had happened.

” There arrive times in our lives when we are brought to bear with our own eyes the devastating impacts of crime, violence, terrorism and other nefarious activities that can only be contained and curbed by police and other law-enforcing agencies. This need has become more acute in the Covid 19 Pandemic perspective as the shock and misery of those already despaired by the deadly disease, when they fall victim to such vagaries, will definitely be more acute and multiplied. The after-effects of what they had to pass through may last a lifetime; it may even affect generations to come thereafter”, the VC said.

Dr. Burfat added that threats of terrorism in the given Virus-hit times might come from any source – organized groups outside the country, those inside the country, established gangs, disgruntled socio-political elements, mafia syndicates, individuals led astray and the lone habitual attackers. Regardless of the source, he said, community policing was critical to identifying those who were planning to carry out acts of violence, preparing communities to respond, aiding public safety officials in the response, and if and when such acts of sin and crime could not be prevented — helping communities heal and recover.

” I felicitate Dr. Waheed Ahmed Abbasi and Dr. Sumera Umrani upon organizing Interactive Webinar on a topic of colossal importance in the given situation”, Dr. Burfat complimented.

Keynote Speaker and Webinar Chief Guest Dr. Sanaullah Abbasi, extending profound thanks to Vice Chancellor Dr. Burfat, Dr. Sumera Umrani and Dr. Waheed A. Abbasi for invitation and opportunity; said police in KPK, under his special directives, had not only been ensuring complete observance of SOPs throughout the province but had also been first complying with them by themselves in letter and spirit.

“There were times when we would be obliged to go after and grab hardcore, incorrigible criminals, but these days we worry more about telling people to stay put, not to unnecessarily venture out of their abodes lest they have taken proper precautions, and to get to them inevitable house-hold stuff including edibles”, Dr. Sanaullah Abbasi said.

Dr. Sanaullah said their everyday duty pattern had undergone a drastic change. They were bound to implement government orders and to restrict public movement, ensure that the masses respected business timings, stayed away from prohibited places, did not open shops before or after alloted hours, did not violate instructions, initially intra-city and inter-city traffic and later inter-province traffic did not ply, men and women did not assemble and throng at one venue, hospitals and pharmacies were stayed protected against mobs and gangs. All that sort of stuff was new and involved a lot of public dealing; and to do all that without being harsh, rough or intimidating to the people who were already in a state of fright on account of the Pandemic. For this, Dr. Sanaullah asserted the police needed to be groomed and grounded into novel sets of training and control patterns.

A large number of viewers cutting across countries, vocations, venues and demographic diversity ardently participated in the webinar and expressed deep appreciation for the event proceedings.