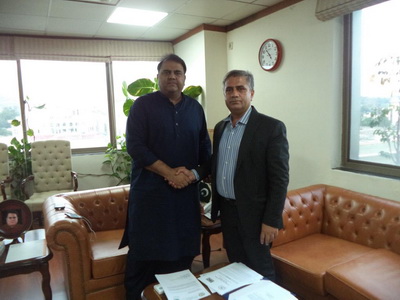 A meeting between the federal minister for science & technology and the member of executive council of Islamic World Science Citation Centre (ISC), president Sindh Science Society and professor at the University of Sindh Dr. Azhar Ali Shah was held in Islamabad, wherein they agreed to establish the regional office of ISC at country’s capital city and include organizing of ISC workshops in research journal and university rankings.

The proposals regarding the establishment of ISC regional office in Islamabad and to include arrangement of ISC workshops on research journal/ university ranking were presented by Dr. Azhar Ali Shah that were approved by the federal minister after detailed deliberation and discussion.

According to the minutes of the meeting issued by the ministry of science and technology, the proposal in black & white was presented by Dr. Shah in the meeting with the minister Fawad Chaudhry regarding setting up of regional ISC office at Islamabad in the light of the recommendations given in the 1st ISC executive council meeting held in Iran’s Shiraz city on June 11, 2019. After discussion on the proposal, the minister agreed it and decided to approach to Pakistan Science Foundation (PSF) for initially handing over physical space for the establishment of the regional office.

Dr. Azhar Ali Shah presented another written proposal for arrangement of ISC workshops on journal/ university ranking scheduled to be held in Islamabad wherein all provincial capitals in collaboration with ISC as per recommendation of Shiraz meeting.

However, it was agreed that the proposed workshops would be arranged and necessary help in this regard would be sought from the director international linkages of PSC Dr. Ahsan Feroze. It was also decided that Dr. Azhar Shah and Dr. Ahsan Feroze shall liaise to implement the proposals.