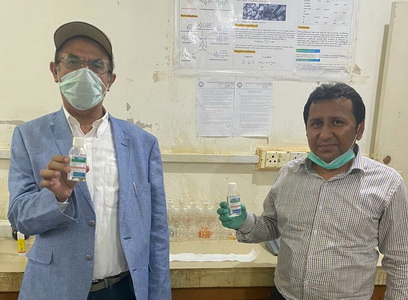 A team of SU chemists and microbiologists under special directives of vice chancellor Prof. Dr. Fateh Muhammad Burfat has prepared an economical yet effective sanitizer at varsity’s own laboratories aiming to distribute it among the modest means communities residing in campus premises and Jamshoro suburbs.

Initially, a modest stock of this much-sought-after chemical has been developed, with a definite plan though to its mass production in the meanwhile.

The team coming up with this innovation is led by Prof. Dr. Shuhabuddin Memon of Centre of Excellence in Analytical Chemistry and Prof. Dr. Sarfraz Ahmed Tunio of Department of Microbiology.

Appreciating and felicitating SU scientists upon their this accomplishment, SU vice chancellor said, ” We have taken several urgent measures to combat the exigency that has come upon us in form of this deadly virus. These steps include sealing up o entrance points to the varsity, improved hygiene and cleanliness drive, enhanced security vigilance, creation of employee WhatApp groups for maximum internal coordination, the formation of volunteer teams, constant security personnel patrolling to check undesired public mobility, and strict implementation of lockdown guidelines issued by Government of Sindh”.

Dr. Burfat called upon those who were well off and those who were in leadership positions in the socio-political spectrum to come forward to help SU get the sanitizer either free of cost or at a no-profit price to those masses in the area who did not financially afford to buy the sanitizer.