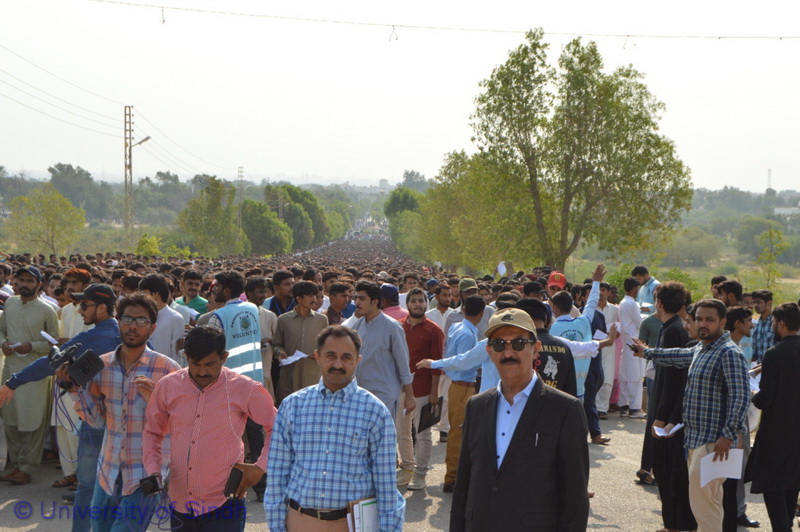 SU campus at Jamshoro took on a festive look as around 23 thousand candidates of which around 5000 were girls and the rest boys dotted in throngs and long beelines the entire width and breadth of the varsity to appear in pre-entrance test for admission to as many as 61 academic disciplines under the bachelor degree programs 2020 morning and evening streams.

In parallel, another sizeable number of candidates appeared in test at the Varsity’s respective additional campuses at Badin, Mirpurkhas, Dadu, Thatta, Larkana and Naushahro Feroze.

The test was conducted in all respects by Sindh University Testing Centre (SUTC). As per available details, a total of 23898 aspirants appeared in the test. As per breakup, 16456 male and 4901 female candidates coming up to a total of 21357 candidates took Bachelor Test at the main campus of the Varsity at Jamshoro. However, the number of candidates regarding additional campuses remained as detailed ahead: Laar Campus Badin – 198 (Male: 132, Female: 66) candidates, Mohtarma Benazir Bhutto Shaheed Campus Dadu – 442 (Male: 301, Female: 141) candidates, Thatta – 90 (Male: 69, Female: 21) candidates, Mirpurkhas – 394 (Male: 276, Female: 118) candidates, Larkana – 323 (Male: 238, Female: 85) candidates and Syed Allahndo Shah Campus Naushahro Feroze – 153 (Male: 104, Female: 49) candidates. Approximately 22957 (Male: 17576, Female: 5381) candidates appeared in the test. This year, pre-entrance test for admission to BS engineering in four streams was also conducted separately, albeit on the same day after the end of general test. This was consequent upon approval of Pakistan Engineering Council (PEC).

Prof. Dr. Fateh Muhammad Burfat, Vice-Chancellor, University of Sindh, in a media brief exclusively arranged at on the occasion at varsity’s Institute of Art and Design, extended warm welcome to all candidates and their parents to the test.

Thereafter, Dr. Burfat said that University of Sindh was setting a world record as around 23 thousand candidates had turned up for the test.

“This is, as I understand and know, the highest number any public sector university across the world would be attracting for admissions”, Dr. Burfat observed.

The vice chancellor made special mention of the highest foreign qualification of the faculty of SU. He said more than 350 out of total of around 700 teachers of the varsity had done PhD from leading universities of UK, Europe, USA and Asia.

“I am pleased to note increasing seriousness for higher education in youth of Sindh and an equal growth in their grooming and self-confidence. I say this because I have seen in person this morning around 23 thousand of them behaving in a highly disciplined manner, which has enabled us to start test well in time. 23 thousand candidates is a big number, and it is extremely challenging to seat such a massive number of peoples in a short time; but due to disciplined attitude and behavior by the candidates and because of efficiency and fool-proof planning by the university team the same had become possible”, Dr. Burfat maintained.

Vigilance teams comprising deans of various faculties and members of SU syndicate also visited various examination centers and expressed their satisfaction over the arrangements made there-in.

Fool-proof security, walk through gates, seating, guidance, test-execution, stationery, water, logistic, medical and other candidate-assistance arrangements were ensured by the university administration on this occasion. For the parents accompanying the candidates, Shaheed Mohtarma Benazir Bhutto Convention Centre was specified as a waiting venue for male parents; whereas, Syed Pannah Ali Shah Model School in the Sindh University residential colony was designated as a waiting lounge for the female parents and guardians. Efficient parking facilities for vehicles were put in place at various ideally-designated locations close to the venue of the test. A contingent of 300 male and female students of the varsity from the platform of Bureau of STAGS was also there, agile on their feet throughout the test time span to guide the candidates.

The candidates were allowed entry to the examination centers, upon careful verification of admits cards; and other relevant documents after thorough body-frisk by male and female security personnel. A vigilance committee comprising Deans, Members of SU Syndicate; whereas, other relevant officers visited various centers to inspect the arrangements of the test and expressed satisfaction to this effect.